At the Easter break in 1968, I think, CHS sent a Hockey Team to Belgium, I was part of that team. We were guests of Standard Liege Hockey Club, who were financially supported by the famed Football Club. The trip was arranged by P.D. Jones, a master at the time who was an excellent Hockey Umpire, who had connections from his university days with the Club President. Sadly, I have heard, P.D. passed away some years back, a great loss to Ruymians. 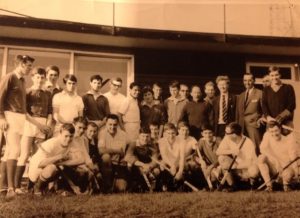 The team coach was, obviously, F. J. “Tommy” Thomas, chemistry master, old boy of the school, great hockey player, and coach beyond compare.. Three games were scheduled to be played in Liege. We travelled by ferry and train and stayed in a very pleasant hotel in the heart of of the City. Our first game was against a Standard Team who we were able to overcome by 2-0.

Unfortunately due to a scheduling mix up our second game against Liege had to be cancelled. However, the reason was a conflict with games already scheduled in the inter-club competitive league within Belgium. Standard Liege was scheduled to play against significant rivals, and league leading Country White Club in Brussels. Graciously Standard Liege allowed the CHS Team to play instead of their 2nd team, forfeiting the league points no matter the outcome. The 1st Team was still to compete against Brussels, but were clearly the underdogs having never beaten Country White..

We travelled with the Standard Team to Brussels, grateful for the honour of representing our generous hosts. We took the field first, our team augmented by Tommy, who could not resist the chance to play with us. We rose to the occasion, and inspired by Tommy’s great play and direction we bested Country White 2nds by a score of 4-1. Buoyed by our success, and encouraged from the stands by our boisterous cheering the Standard Team beat Country White for the first time in their history of meeting. The entire Standard entourage was ecstatic with the results of the day and we were treated to a celebration at a splendid restaurant and bar in Leuven. We were not permitted to pay for anything, and it turns out Leuven is the home of internationally famous Stella Artois; it flowed well! Our final match was against the University of Liege team. Again we were successful scoring a 1-0 victory. 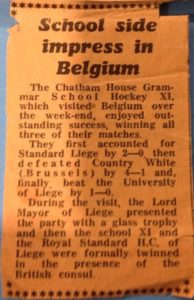 The entire trip was a huge success for everyone involved. Our hosts were generous, friendly and enthusiastic. Not only were we popular as hockey players, but many of the Liege patrons of restaurants and bars we visited enticed us to sing WW1 songs such as “Pack up your troubles…” and “it’s a long way to Tipperary”. Our glasses were rarely empty (I am not sure what the legal age to drink beer in Belgium but it didn’t stop anyone , locals or visitors). Not only did we play great hockey, we also learned to play Foosball, learned bar tricks like flipping beer mats, and ate horse steaks. A wonderful trip, full of sport, friendly fun and detente.

The other picture is a cutting from the Isle of Thanet Gazette at the time (that’s how I know the scores LOL).

If any other have memories of the trip, and would like to share them it would be great.

This article was contributed by Terry Day, who also wrote:

"I’m Terry Day and attended school from 1961 to ’69. I moved to Canada in 1975 and despite a brief period in the ’90’s lost track of the ‘old school’. I am now retired from an active career in the IT business and as a result have been sorting through the detritus one collects over the years. One thing I came across was the pictures I have attached. Reading your “Writers Wanted” online I thought I would try and recount our adventure into Belgium in ’68. I have tried to remember as much as I can, and have spent hours trying to remember the names of those who have (?) against their names. For some reason there is a block against them, as I remembered the rest with ease.
I am coming back to Thanet in early April and hope to meet up with Colin and Sue Leman who I think you know. If there are other contemporaries around I would like to try and make contact with them too. I’m sure Colin will see Geoff Redmond and Ray Roby, all of whom I worked with at VW in Ramsgate.
I loved Chatham House, and enjoyed my time there. In fact I would probably still be there if Pearce hadn’t suggested I move on (lol). Anyway I’ll send this off now, for your perusal, and if you are interested I can think of a number of memories I would be happy to share. Do you remember, or know about Oscar of the Killiecardie? If not I’d be happy to provide what I know, and perhaps start a chain of memories.
Hope we can meet when I’m back."

I hope that this will inspire further interesting contributions, and perhaps confirm the names with question marks.