Gypsy Tart; who remembers the excitement that swept the Dinner Hall when it was discovered that this heaven sent desert was included on the dinner menu for that day? I am not sure how lunch is catered for in today’s school, but back in the ’60s School Dinner was provided for pupils from all over Thanet. There was a full kitchen, complete with cooks, who served up, in hindsight, not bad meals. I’m sure at the time I, and many others, may have argued that point, but...

Two sittings occurred, with the junior school in the first sitting, probably with elements of the ‘upper’ school as table monitors, and to balance the numbers. The rest of the school was in the second. Teachers were served on a raised stage at the end of the dining hall, and ensured the proper sense of decorum was maintained throughout the meal. The meals cost parents on a weekly basis I think, with some kind of ‘pre-registration’ to allow for planning quantities to be served. The alternative was going home to lunch (for those who lived close enough), a packed lunch, or, for members of the sixth form who were ‘allowed out’, skiving of to a local coffee bar to spend the ‘redirected’ lunch money. But back to Gypsy Tart. It wasn’t just at CHS that its popularity reigned. In subsequent years I have encounter enchantment from ex-pupils from across the area with this epicurean wonder that appears to have been served widespread. As an aside, none of my contacts from that period have been able to fully reproduce the wonder of the school desert, no matter which internet recipe was used. On the day in question the menu for the day’s feast was especially wonderful, roast beef AND gypsy tart!.

I do not remember the year, but do remember it was a ‘shoulder season’, Spring or Fall (sorry Autumn, I’ve lived in Canada for over 40 years!). I was in the first sitting, I do remember, which would suggest sometime before 1965, but that could be wrong. We were part way though the meal when the Fire Alarm sounded, stridently. As no test was scheduled (who would have in the middle of lunch?!) the Staff and Prefects followed the establish drill to evacuate the school buildings, shepherd the pupils on-site to the upper playground. Designated staff collected the form registers and swept the building to ensure complete evacuation. All support staff were also required to evacuate, including those in the kitchen. Lines were established, by form number, and using the daily and lunch registers teachers ensured that all were present and correct. I remember the season, because while it was not wintery after a half-hour standing in line in the upper playground, it got mighty cold! At the same time emergency services, who were alerted automatically, scoured the building for the cause of the alarm. They found nothing. A false alarm being declared we were all allowed back into the building to continue our repast. 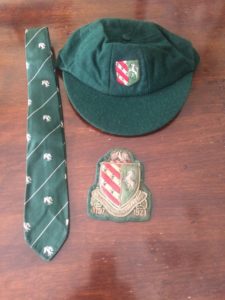 But no sooner were we all back and warming, when a second alarm was raised, this time coming from the kitchen staff. During all of our forced absence two full trays of Roast Beef, and two full trays of Gypsy Tart had mysteriously disappeared. I don’t think the cunning culprits were never caught, I never heard, and I don’t know how the kitchen staff managed to feed the second sitting, I can only guess. I also suspect that God wasn’t involved with those, who on this occasion, helped themselves!

This article was kindly contributed by Terry Day, who in his email to me (Ed) he also wrote:

Dredging through more “stuff” I found more mementoes of my time at CHS. The cap is regular required dress, circa 1964/5. The School Colours Tie was awarded for rugby and hockey, and was awarded ’67/’68. The (somewhat battered and tarnished - the tarnishing proves it is silver and gold wire as advertised, and costed!) Prefects Badge is the same vintage. I was made House Captain of Mann’s at that time and went on to be deputy-head and then Head of School in ’68/’69. Tony Shepherd was Head Boy for the first term of ’68/’69. When he went of to University in December I was ‘promoted’ and Pete Arnold was elected my deputy.