Thank you for your condolences, Jo had been diagnosed with lung cancer in 2008 but the tumour became active earlier this year. On Remembrance Sunday she was very poorly, admitted to our local Pilgrim's Hospice on Wednesday and died on Friday afternoon, with all the immediate Family at her bedside.
I am adjusting my lifestyle with the support of my daughter Tracy and adult grandchild Rebecca, both working and living locally. My lack of culinary skills currently dictate a menu of "ready meals" but am learning the art of preparing vegetables!
As Jo was a Clarendon House pupil I thought you might like to read the Eulogy, (time restricted to 8 minutes) I wrote for the Celebration of her Life Service on 12 December 2018. 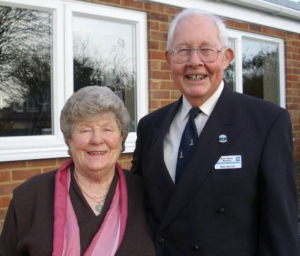