I was very honoured to be elected as your Chairman once again for 2019 and intend to revisit some of the ideas that the committee had considered to attract new members.
With this in mind, we have invited someone from the Friends of the School, Sue Hurrell, to attend our committee meetings. This enables us to more fully understand and assist the school and equally, we have been invited to send a committee officer to attend their meetings.
At the end of this newsletter you will find information on forthcoming school events, where we will display our new OR Club ‘pop up’ banner, describing our aims & how we assist the school(s). The idea of the banner, originated from some of the discussions with the ‘Friends’ committee, who suggested that students & parents were not fully informed about the alumni. We will ensure a committee member is available at the events to answer questions & supply membership application forms.

The annual dinner followed the AGM and although not well attended was enjoyed by those present. Once again we invited staff and students of the School to the event, which was once again catered by Debbie & Keith of the Racing Greyhound. 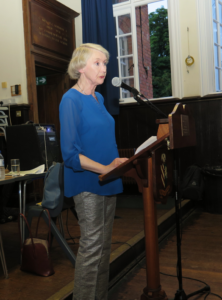 The after dinner Speaker this year was an ex-student from Clarendon House Grammar School, Marion Shoard, a pupil at Clarendon House between 1960-67, she went on to study at Oxford University and then embarked on a career in countryside conservation and access, mainly as a writer and campaigner; her books include The Theft of The Countryside (1980), This Land is Our Land (1987 and 1997) and A Right to Roam (1997). After her mother, still living in Ramsgate, developed dementia in the late ‘90s, Marion switched focus to concentrate on older people’s issues, campaigning in such areas as better care for people in care homes, but also offering information and guidance on the choices which confront older people in talks, articles and her 1,000-page book How to Handle Later Life (2017). In her talk, Marion reflected on aspects of life at Clarendon House which she felt had proved especially useful and enriching during her career (such as guidance on how to evaluate advertisements critically and identify the wild flowers of Sandwich Bay), and other areas which on reflection she considered the school could usefully have offered more guidance. These included the ability to improvise and to understand how the world actually works. Marion’s brother, John, was a pupil at Chatham House between 1954 and 1962 and the first head of Heath House.

We have had a number of our membership sadly pass away this last year, which are included in Obituaries and there is one poignant Eulogy given at the Church Service for Mike Barrett’s wife Josephine, who attended Clarendon House when Mike was at Chatham House School.
During the year since having returned to Thanet to live, my wife and I have met up for several enjoyable lunchtime meetings with Peter Crisp and Mike Barrett. I include a photo of us in Minster at the Bell Public House which has just been taken over by Debbie & Keith from the Racing Greyhound.
During our meetings they both showed us photographs of when they were at School ‘many’ years ago and one of the points suggested by a committee member when I attended a Friends of the School Meeting, was that we should try and gather copies of old photos for our website, both from many years ago and more recent, in order to initiate discourse between ex-students.
Debra Liddicoat, the head teacher gave a speech at the senior prize giving, which can be viewed on the OR Website She ended on an excellent note, showing that the school(s) still teaches the students to strive for excellence even as they leave to join the big wide world!

"Life is short and sometimes fragile so don’t be a spectator, work hard, play hard - have fun, stay young, get involved, make a difference, take up all the opportunities offered to you, make opportunities, don’t expect things to be handed to you - go and find them, take risks, don’t beat yourself up if you get things wrong, getting things wrong is all part of getting things right in the end, be kind, be your own person, like yourself and always strive to be the best you can be."

Lastly, I repeat, if you have any other thoughts on how to reach colleagues from your School days to help expand the membership or have any suggestions for both sports and social events for all the age Groups that are members of our Club, please do not hesitate to send your ideas to the Secretary, copied to the Chairman. The Committee will then discuss and endeavor to implement them over the coming years. Just a few lines to us will help; it does not have to be a manuscript!