Old Ruymians Cricket Week this year consisted of two games, the first against a local Ramsgate side Nelson CC and the second against the touring team Alexandra Park CC.
Unfortunately, the game against Nelson CC was washed out on Monday, 12th August 2019 after a downpour an hour before the game was due to start, resulted in puddles on the square and an extremely wet outfield. 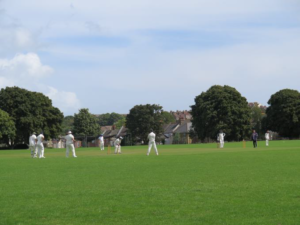 Better weather on Friday, 16th August 2019 meant that the game against Alexandra Park CC (AP) went ahead. The ORs fielded a team containing six official ORs whose ages ranged from 20 to 65, one current pupil and four honorary ORs (one of which has a son currently at the school).
AP won the toss and chose to bat (in order to allow more recovery time for those who had now been on tour all week and had attended the usual revelries at Broadstairs CC the previous evening). The ORs bowled well initially and had two AP wickets by the 12th over with only 26 runs being scored. Special mention here to Hon. OR Stuart Croucamp, whose first five overs went for 1 runs with 4 maidens. AP rallied however and they then went on to score 221 for 4 wickets after 42 overs.
After tea, the ORs opened with some aplomb. 150 runs were scored before the first wicket fell, with Hon. OR Scott Tift scoring 86. His opening partner OR Josh Walton went on to score 72. This start meant that the ORs were able to reach the winning total of 222 runs for the loss of 4 wickets in 37 overs, with OR David Lodge and current pupil Hugo Ursell completing the win on 18 not out and 4 not respectively.
The victory was celebrated by the ORs and AP in the traditional manner at the “Rose in June” public house afterwards.
It is hoped that both fixtures will be possible next year in addition to the game against the School in April, as it will be the 200th annual game against the school, since 1880!