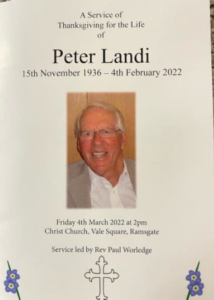 Peter Landi was born on 15th November 1936 in London Adopted at 6 weeks old by Joe and Rose Landi, he moved to Ramsgate and spent his childhood years living at Alfred Villa in Balmoral Place. His father Joe was a trawlerman, spending months away from home, with his mum Rose the homemaker. His sister Rosalin was born in January 1939 and a loving bond developed between them. In the midst of war with bombs pounding Ramsgate, the family were together at her bedside when she sadly died of meningitis at the tender age of 3. This remained a traumatic memory long into Peter’s old age.
Peter spoke about the war years as being a very exciting time to be a boy, he learnt how to recognize the sound of the planes, with his mum asking “Peter, is that the Germans coming? No it’s ok Mum it’s one of ours”
Always outside having adventures with his mates, he said the worst possible punishment for any misbehaviour was being kept inside by his mum.
Peter was an altar boy at Holy Trinity Church, and frequently reminisced about the Rector’s patience and kindness towards him. He often told us about the time he ran into a lamp post whilst on his way to evening service with the Rector having to delay proceedings to take him home!
He attended Hereson Boys School where he won a scholarship to Chatham House Grammar School, achieving 4 ‘O’ level passes. His Aunt Daisy, who he admired greatly, taught him to play piano. She was influential in developing his love of learning, taking him to London for the first time and letting him order the meal. He joined the army in 1953 aged 16 as a boy soldier in the Royal Army Service Corps, completing his basic training at Aldershot. His first overseas 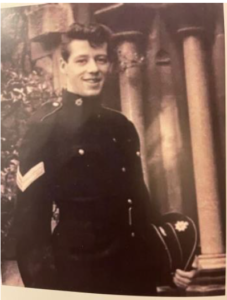 posting was to Korea on a peace keeping mission from 1955 to 56. He spoke about living in a tin hut with temperatures well below freezing. He then transferred to Malaya, where he spent 2 years, progressing to the rank of Sergeant, and learning the local language. Returning home in 1958, he was appointed to a position in the War Office, using his experience to work on top secret operations across Asia. Sharing a flat with his army mucker Jack Coleman in Goodge Street, work hard play hard was their motto.
He met his first wife Suzanne and they married in 1959 moving to Plumstead. Kevin was born in June 1961 at Woolwich Military Hospital. After leaving the army in 1963, he worked as an Area Sales Manager across London and the Southeast using his considerable skills of persuasion to get housewives to buy the innovative cooking aids of the time, pressure cookers and food mixers, much to the chagrin of the husbands returning home and seeing the newly purchased gadgets.
Always looking to improve himself, he studied and passed an ONC in Business Studies at Woolwich Polytechnic.
The family moved back to Ramsgate in 1965, where Peter got a Job at Richborough power station in the wages office, Sara was born in February 1965. After the sad breakdown of his marriage to Suzanne, he moved to Pfizer as a Laboratory Technician where he met Jude in 1970. They married in 1972, and Samantha was born shortly after.
He spent many happy years at Pfizer, with a very active social life, where he made many friends.
Never happier than when he was out on his boat, the Robbie B, landing hauls of seabass, resulting in great fun driving around the village pubs with Jude, weighing the fish on kitchen scales to sell to the publicans. He also enjoyed making his own delicious fish soup recipe for family and friends.
Enjoying family holidays across the Mediterranean, as well as some notable solo trips on safari in Africa and winning a fishing competition in Gran Canaria catching a 240lb tuna. Typically sharing the prize money of 2500 pounds with the rest of the team, and the fish itself with the locals; that was his character.
Together with Jude they had some wonderful trips notably visiting Boston and New England in the fall and revisiting his old army haunts in Malaya and Singapore, and a big family holiday in Florida with Martyn & Emily.
Retiring at 58 years old, Peter spent his time as a passionate advocate of Ramsgate chairing the committee spearheading the fight for the port access road, where HGV traffic was blighting the lives of local residents.
Quoting from Hansard which records the House of Commons debates, on 18Th October 1995 Jonathan Aitken MP said “After long consultations and much popular pressure by an energetic organization known as the Ramsgate action road committee, chaired with great vigour by Peter Landi, over 3300 local people wrote in support of the planning application, and earlier over 12,000 people had signed a petition in favour of the project. Against that background of unusually strong populist and environmentalist backing, all the planning permissions for the road have now been obtained.”
He truly loved Ramsgate and its heritage.
It is fair to say he was at times, a thorn in the side of Thanet District Council as he fought for the town and its people. As part of the Ramsgate society, he ensured the refurbishment of Gwyn’s Clock in Queen Street, the opening of the Ramsgate Tunnels, and the publication of the Millennium Book.
He was an active member of Probus, as well as a Freemason, becoming Master of Lewes’s Lodge, and a member of Christ Church.