A big thank you to John Stroud and Pete Somerfield for their comprehensive info and report.

Please feel free to add a comment or email editor@oldruymians.co.uk. Thank you 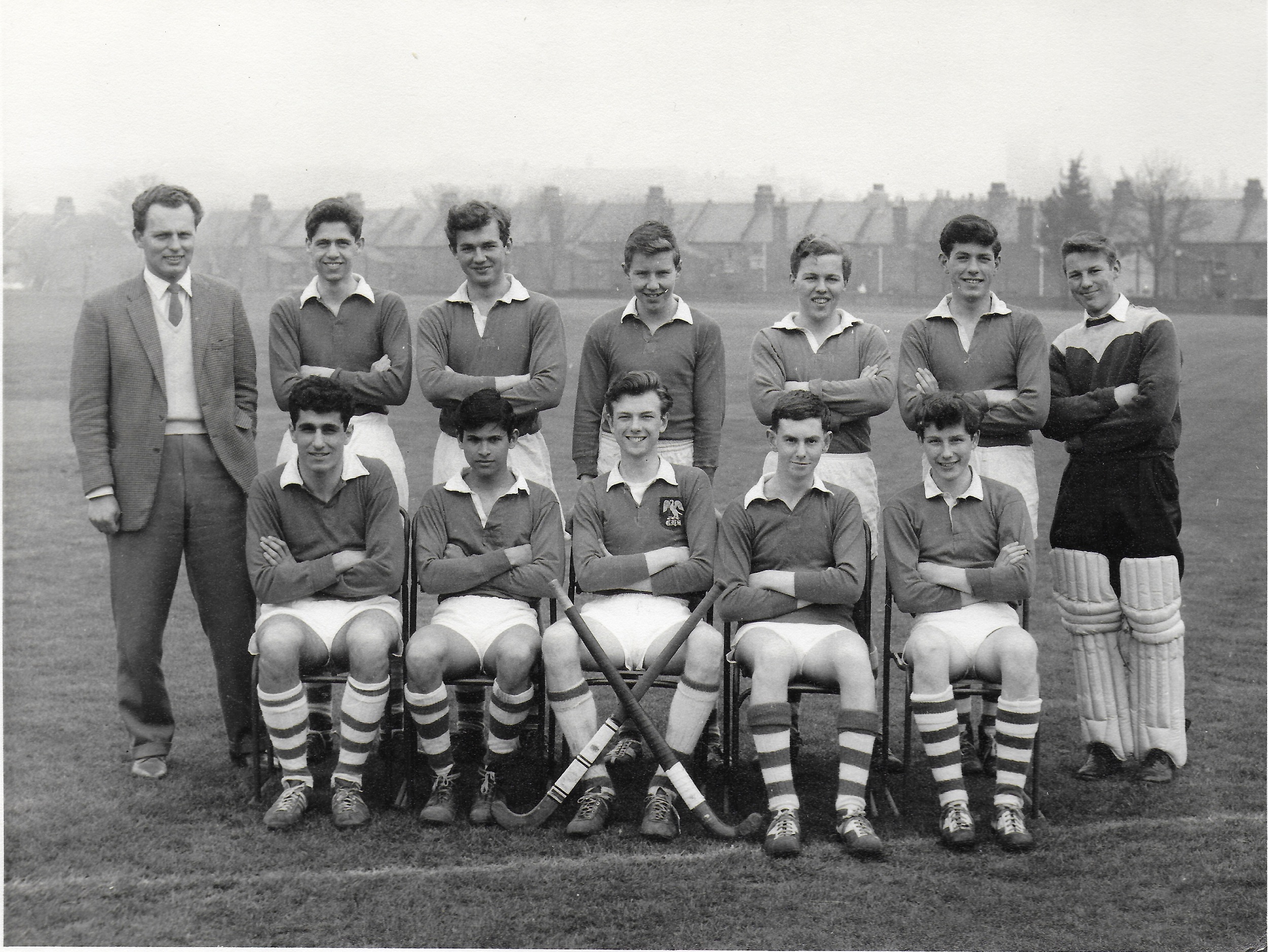 "The second from the right back row is John Stroud. One or two more I remember from hockey photo. Goalkeeper was Taylor, absolutely fearless. He was selected for a third XI for Kent and at the county tournament at Seaford ended up in the final against Kent  first XI mainly due to him and a tear away centre forward from Borden GS Sittingbourne. Next to him John Griffin, ended up Head Prefect. Dark lad second from left sitting Diaz. The fact that Kent fielded three XIs that year, they all got in one or the other."

The photo was clearly taken on the school ground not far from the pavilion.

I should make the general comment that the season was cut short by what turned out to be one of the worst winters of the last century with biting easterly winds and huge quantities of ice and snow which lasted from mid January until the beginning of March. CHS remained open the whole time which would not happen now! I think we only played one or two games in January and played the rest of the fixtures in March and perhaps early April. There were no astro turf pitches then and we practised occasionally on the upper playground when it had been cleared of ice and snow and even on the firm sand at low tide on the main beach at Ramsgate. Tommy will remember this.

The second XI had a short but excellent season. After being beaten 4-0 by St Lawrence College, the side improved tremendously and won the remaining six games. An 11-0 win over Ashford was the greatest win goal-wise but the 1-0 defeat of a strong Old Ruymian side was the most impressive. Prominent among the defence were Stroud, Taylor, A Marshall and Western whilst goals were made for Diaz and Prastitis by Gritten and P Marshall."

Note: Pete modestly does not say anything about his own substantial contribution as an excellent skipper and goal scoring inside forward. He thinks we only lost the first game since we actually played against the SLC first eleven!

As promised here are a few comments re some of the people in the photo. The member of staff Mr Andy Western and John Western in the front row were brothers. I guess there must have been about a 10 year age difference between them. Andy Western had been Head of School at CHS in the mid 50's and after Oxford went into teaching. He taught chemistry at CHS for a short period in the early 60's then moved on. His brother John was an outstanding centre half and was a key member of the CHS 2nd XI in 1964 and the First XI in 1965. He went up to Oxford to read geography in 1965 and eventually became a professor at an American university. Ken Girkin has described him as "my outstanding pupil". I believe that Andy Western who at one time was teaching in the Derby area died some time ago.

Three members of the team Des Payton, Pete Somerfield and John Gritten joined the RAF. Pete became a navigator but does not know what happened to Des who I think came from Herne Bay. John Gritten started at CHS late but was an outstanding rugby player and athlete as well as a fast and tricky forward on the hockey field. He had integrity in spades and succeeded me very deservedly as Head of School in 1964/5. He became a Wing Commander in the RAF and was awarded the MBE. He spent a good deal of his career in Scotland but sadly died in 2018 at the age of 71.

I don't know too much about other team members but the Marshall brothers lived in Birchington and I think there was another older brother called Ian who was also at CHS some years earlier. Peter was older than Alan and they were both excellent games players. I believe Peter went into teaching and Alan I think studied Law at Bristol University but I have no further information about them. Louis Prastits was an elegant and talented all round games player and became an outstanding fly half for the First XV. I believe he went on to London University. Elgin Diaz's family came from Sri Lanka (then known as Ceylon). He was a talented all round games player who became a popular House Captain of Simmons. Indeed he held that position when Simmons narrowly became Cock House in 1964. I believe he might have gone on to a Scottish University. I have not seen him since I think the summer of 1966 when the World Cup was in full swing. I came across him working at a stall in Dreamland!

Finally just a word about Adrian Taylor the goalkeeper who Tommy has described as a tearaway. I would say that he was somewhat foolhardy, a trifle nutty and prone to getting into scrapes. Nevertheless he was very brave and kept goal almost faultlessly for the unbeaten Second XI which I captained in 1964 and he played for the 1st XI in 1965.By then he had calmed down somewhat and he became a prefect when John Gritten was Head of School. I have a recollection of the fire alarm bell sounding at school in I think 1958. The whole school was assembled by forms on the lower ground. W P Pearce standing by the railing outside his study simply said "Taylor 1D go and stand outside my study". Off he went and no doubt emerged a bit later feeling pretty sore! Someone must have spilt the beans that he had pushed the button as a lark.