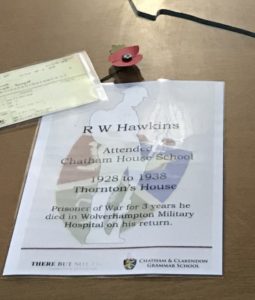 A copy of the Ruymian Notes from 1945 lists the 95 names, known at that time, of students and staff who were killed during the Second World War. This year we could not have every one of the 95 killed individually recognized. We therefore brought 14 names out of the pages of our records to sit amongst us. Their names, time at School and in which House they belonged, were recorded along with copies of the Certificates of their final resting place.

On display were clippings giving interesting accounts of the months of 1939 before the start of the
war detailing normal School events, including a trip by Scouts to Lichtenstein at Easter 1939. Exchange trips to Germany explain the situation there as war was declared including the message from home to get out and be careful not to be shot at the border! Also, details from the start of war in September ’39, the School site’s preparation for air raids, including limiting the number of students attending until enough shelters were built with the help of students and staff. In 1940 the school was evacuated to Stafford, articles of both the preparation, the move, School life there and the call from parents in the later stages of the war to bring the students home, gave insight to the practicalities of life during war. 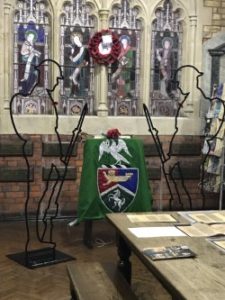 The clippings also give news from the front including details on those who were Prisoners of War (the boys of the School collected money for parcels to be sent to the POWs with amounts raised by each House duly noted) and along with news of marriages of past students – some home on leave, births of the next generation, the sad news of those missing and dead. The display was viewed by members of the public, past & present students and staff over the weekend. On Remembrance Day our students sat with the Tommies during break and lunchtime, reading, researching homework projects and relaxing playing cards.

Poppy decorated cakes were on sale and with a voluntary collection a total of £102 was raised
and will be included in the monies collected by the School for the Royal British Legion Poppy Appeal from the sales of poppy merchandise including zip pulls, bangles, rulers and of course the Poppies themselves. Thank you to all who came along, the Tommies are now safely packed away waiting for next year when once again they will sit amongst us. This time to commemorate 80 years since the evacuation of Dunkirk, and the Battle of Britain, with more details of life during the evacuation of the School to Stafford.