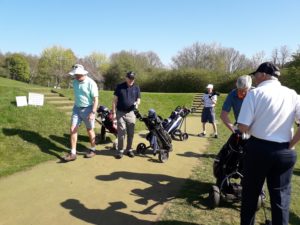 In a break with tradition, the Old Ruymians ninth annual golf day ventured outside of the Isle of Thanet and was hosted at the Belmont Park course in Faversham. Few of the participants had previously played the course which levelled the playing field somewhat on a contrastingly undulating course. The weather was once again more than kind as we awoke to a scorching hot morning in glorious sunshine, rather different to the downpour on the previous Friday morning. Freshly prepared bacon rolls and coffee were served on arrival to provide sustenance for what would be a challenging morning. In spite of the fine weather, there were thunderstorms forecast for later in the day and the assistant manager Jo Tandy had to brief us on the procedure to evacuate the course in such an event. Thankfully no storms arrived and we all avoided any risk of making undesirable headlines in the local news. The course was in marvellous condition, both the fairways and the greens with little serious rough to worry about. Sharing the course with innumerable golden pheasants added to its charm. After a first tee at 9.30am the final group retired to the clubhouse at 14.45pm. A fine lunch of free-range chicken stuffed with sun-dried tomatoes and garnished with chopped fresh basil was served, accompanied by sautéed potato cubes and al dente vegetables.

Both the course and the lunch were highly regarded by all participants. The usual prizes were awarded. This year saw a new name added to the trophy, that of Antony Nicolaou who scored 39 points and also secured the prize for the longest drive on the 18th hole. Steve Harris won the nearest the pin. Winners were presented with hip flasks engraved with the Chatham House bleeding pelican which should provide an appropriate source of libation during those hard winter months when the serious golfers continue to craft their swings. Thanks were given to the management and staff at the course and collection made for the ladies that provided such excellent service at the lunch table.
Participants: David Wake, Nic Holladay, Peter Arnold, Paul Hollingum, Tony Tucker, Terry Gilliland, Barry Holton, Terry Westby, Bob Green, Tony Debling, Ty Harding, John Darby, Martin Gilham, Steve Harris, Mark Lewis (golf only)
Tony Carpenter and John Copeland (lunch only)
850 views