Brian gained a scholarship to Chatham House School and joined the A.T.C. at the age of 13/14 at Northdown House. He became band leader and trained at 16 to be a pilot. He learnt to fly at Ramsgate Airport, Pysons Road in a Tiger Moth, where he first met Hugh Kennard. 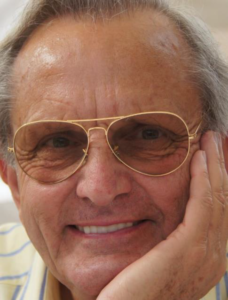 However he was too tall for the R.A.F. so joined the Royal Artillery’s new Regiment for Spotter Pilots where he became Cadet Officer of the year. During this time he was often spotted seen doing Loop the Loop over Thanet with local girls leaning out of their windows to watch him. In fact he once displayed a Victory Roll over the Winter Gardens buzzing Winston Churchill while he was attending a Conservative party conference. The local Bobby, Timber Woods arrived at his parents’ house and asked for him saying that they knew it was him because they could read the number on his Tiger Moth. He could have lost his licence. Winston Churchill was more forgiving and said “just don’t do it again “
He completed his Regimental training at Middle Wallop and was commissioned to Hong Kong on the Chinese border as a Spotter Pilot and became fluent in Cantonese. His time at Chatham House qualified him to enter as 2nd Lt. and he was promoted to Captain within 3 years.
Brian left the army and secured a position with B.P. in Libya and was present when they first struck oil. Brian then purchased an Aviation Company named Westpoint at Exeter but was unable to save it from collapse. He returned to Manston where he was reacquainted with Hugh Kennard who gave him a Freelance position on D.C4’s later joining B.A.F. at Southend.

Brian purchased a D.C.3 and flew to the Cameroons with his wife, small baby, an Engineer and spare parts to start another adventure. They lived in the plane while he flew from the local Airport, (his wife and baby had to move out when he was flying ) later transferring to Nigerian Airways at Lagos where he was First Captain. Brian then worked for British Aerospace in Mallorca and Tenerife for a few years.
Around 1991 he stopped flying and became the Manager of Botswana Airways, travelling to Bolivia, New England, Seattle and India as a Consultant and Lecturer. It was at that time that he became a friend of Richard Branson who took him to Kazakhstan and China ( for his use of Cantonese ).
Brian retired to Mallorca due to bad health but still watching planes from his hill top Villa near the Airport in Santa Eugenia, where he passed away at the age of 83 years.