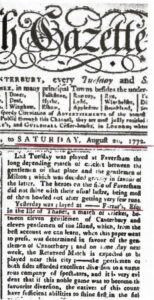 Bob Lee, amateur local historian, Old Ruymian and formerly a keen cricketer has unearthed a number of interesting items regarding cricket at the Chatham & Clarendon Chatham Street site and in the early days of Chatham House.

The first snippet is from what I assume is the Kentish Gazette (founded in 1717) which contains a report in its Saturday 20th August 1772 issue of a match played the previous day between a Canterbury XI and an Isle of Thanet XI.

He also kindly sent us an article originally published on the "We Love Old Ramsgate" Facebook page. 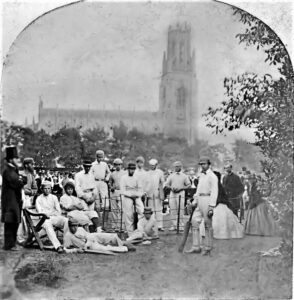 "I found this photograph on a Pinterest website with the very basic caption 'Ramsgate c1860'. That magnificent Ramsgate landmark St. George's Church 'ghosted’ into the backdrop of the picture of cricketers padding up, and did of course provide all that one needed to know as to precisely where in Ramsgate, and then allow one through newspaper archives to produce detail of a likely occasion.
My research suggests the match to have been on what was a Townley Estate that became the expansive sports grounds of Chatham House School. There was in 1862 when I believe this photo was probably taken, a team in Ramsgate known as Chatham House Cricket Club. Not a school team, but adults. The Thanet Advertiser newspaper archives produced this match CHCC v Isle Of Thanet Cricket Club in June 1862. Several interesting aspects of the event are worthy of mention:
1) photography at that time was very much in its infancy, so the quality and historic value of this one is speaks volumes
2) in the mentioning 'infancy', St. George's Church in 1862 is a mere 35 years old, and the game of cricket i.e. close to today's format of 11 players, rules, and kit etc. was likewise 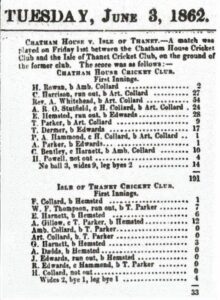 3) top scorer in the Chatham House side i.e Reverend Arthur Whitehead, was the curate of the church as well as headmaster of Chatham House School 1854-1864. He had inherited the headmaster position from his father Thomas Whitehead, the school's second head in 1817 after William Humble had founded the school in 1797. By 1874, cricket was very much included into the school's curriculum, with headmaster Reverend Edward Gripper Banks a strong sporting advocate, also a player for CHCC.
FOOTNOTE: As a former student and keen sporting participant myself, I am also now a member of Old Ruymians Club whose website will also receive this story. I would urge all former CHGS and Clarendon House students to register applications for membership of Old Ruymian Club to benefit in the sharing of stories of the past and renewing acquaintances with former classmates" 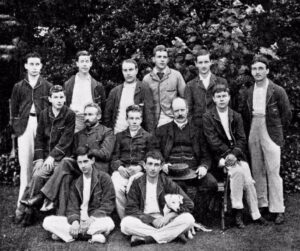 Finally bringing us almost to the end of the 19th Century is this photograph of the Chatham House Cricket First XI dated 1894. It also features headmaster Edward Gripper Banks (rhs seated holding a hat), a strong advocate for a variety of sports into the school system, including cricket which he himself played.