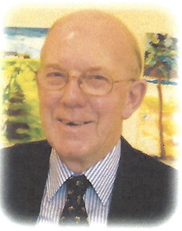 Ernest Albert Yeo was born on Whit Monday, 16th May, 1932 and died on 12th September, 2020
Ernest was born at 17 Lillian Road in Ramsgate, into what was very much a `Ramsgate family' — his parents lived at Lillian Road all their lives, his father's parents lived one street away on Dane Park Road, and his grandmother lived close by on Hereson Road together with Ernest's aunt. Ernest's father was a local postman but, more importantly, he was a leading tenor in the Ramsgate Operatic Society and was also the Organist at St George's Church in Ramsgate — and this was where Dad's faith and love of singing originated.
Ernest's early schooling was a little 'hit and miss' as the WWII started when he was seven. Having been evacuated once to Liverpool (where
the cousin's house he was staying at was bombed out) and after some private tuition back in Ramsgate, he joined Chatham House School in 1943 and was evacuated a second time to Uttoxeter together with the whole of the first form.
Returning to Ramsgate at the end of the war, he completed his Higher Schools Certificate in 1950 and stayed on to take university scholarship exams for Oxford. He was not successful in these but, amazingly, came 2nd overall in the Civil Service Executive entrance exam and was offered a position in his first choice department, the Treasury. After serving as a radar engineer for his national service, he joined the Treasury on 23rd March 1953 and spent his whole career in the civil service, retiring on the day before his 60th birthday — 39 years later. His long-service, commitment and achievements led to him being made a Companion of the Imperial Service Order — a civil service award for "long and meritorious service" and of the same standing as an OBE.
In parallel with his successful career, Ernest managed to find time to devote to his passion, which was music making and particularly singing which he shared with his wife, Celia. He sang in the Treasury's own choir, the Treasury Singers, throughout his career and conducted them for 11 years at their regular concerts in Westminster churches, often with orchestra and soloists. He was a leading member of the Bach Choir for even longer — 47 years in total, for many years conducted by Sir David Willcocks. A 'Tenor 1', he performed with them in all the main London concert venues and in many cathedrals across the UK, he sang with them at the wedding of Charles and Diana in St Paul's, and he toured overseas throughout Europe, to South Africa and the US, and even as far as Hong Kong, Australia and New Zealand. He also served on the Committee and was Committee secretary right up to the day he retired from the Choir.
Appropriately, Ernest first met his wife, Celia, a music teacher, on a summer music course (also conducted by David Willcocks) and shortly afterwards they both joined the Bach Choir. They were married on 2" January 1965 and lived first in Hayes and then, from 1973 until their deaths, in Bromley. On moving to Bromley the final piece of the jigsaw fell into place, as they joined Bromley Parish Church and threw themselves into church life. They both sang in the church choir (Ernest for over 40 years), as did their three sons, and Ernest also served as church treasurer, churchwarden, and was a member of the PCC for many years.
Ernest's and Celia's musical commitments continued in their retirement as they served as joint chairmen of the Bromley Festival of Music and Speech, only stepping down after 20 years' service in 2014, at which point they were jointly presented with the Mayor's award 'for many years of unstinting service to the people of Bromley'.
Celia predeceased Ernest in February 2019, having suffered a debilitating stroke in the summer of 2013. Both Celia and Ernest are sorely missed by their three sons and their families, David, Andrew and Tim, all of whom were able to be with Ernest at the end. Ernest's thanksgiving service at Bromley Parish Church was an uplifting celebration of his life and the family life that he and Celia created and, despite the current restrictions, was able to reflect his love of church music, the organ, and singing.

Mike Tyrell writes: in October, I was notified that Ernest Yeo had passed away by his son.

‘I wasn’t sure which of you to contact but my father, Ernest Yeo, who died a few weeks ago, asked that the school / old boys association be informed of his death. Dad attended Chatham House School from 1943 – 51, originally joining the first year in Uttoxeter where they were evacuated, and I think he is still a paid-up member of the Old Ruymians. For many years we, as a young family, would visit our grandmother while Dad attended the annual old boys’ day, and then join him to watch some of the cricket match in the afternoon.
I have attached a copy of his obituary, which you might like to “publish” on your website / old boys’ magazine’.